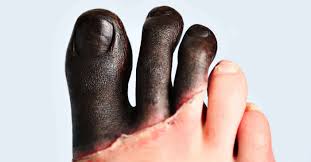 A homeless patient came into our free clinic in order to have his toes evaluated for the first time in six months. His story started as he explained that he’d been out in the middle of Wyoming when his car had broken down. When he came into our clinic, it was the middle of June and it was hotter than you can imagine.

Continuing his story, he explained that he didn’t have a cell phone and instead of waiting for someone to drive by and help, he began walking. It took him over an hour to walk the four miles to the gas station and to make matters worse, there were several inches of snow on the ground and freezing temperatures. He called his family and they came and picked him up. Later that night, his toes started burning with pain. Over the next few days, he watched as the tips of his toes started turning black. A week later, he went with some other friends and towed the car back to a garage to be worked on. That had been six months ago.

At this time, I noticed a smell coming from him, and I wasn’t sure if it was from not showering, or a more concerning problem. I’ve seen several cases of Frostbite. I asked him about the smell, he said it had been going on for a few days, but that he didn’t have the money to go to the Emergency Room. He reported some nausea, fever, and chills over the last week as well, but was lucky because the pain had resolved after the first few months. There was plenty of numbness and tingling, however.

When prompted, he quickly removed his shoes and socks. The site was pretty concerning. Several of his toes were black. I asked him when the blackness had started and he wasn’t really sure. He hadn’t had a chance to really clean his toes in months. I was shocked by this. He hadn’t even really had them looked at all.

The first toe was really the worst. There was some blackness on the second and third toes. Frostbite is when the coldness of the air, ice, water, or whatever, causes damage to the tissue affected. Blood flow to that area is greatly affected. Over time, depending on severity, some of the skin may have a return of blood flow and an improvement in the skin. 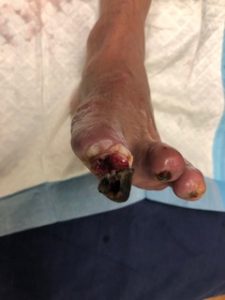 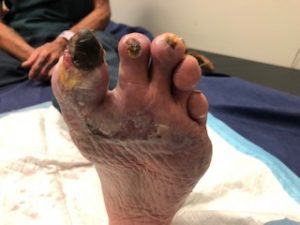 After six months though, the likelihood of saving the skin that is black is very unlikely. I began feeling the foot affected, his left. He had some sensation in the foot, ankle, and most of the outside toes. When I touched the dead skin on the first digit, it moved slightly. There wasn’t much left of that skin and certainly, it wasn’t getting any blood flow.

I began explaining my concerns about a possible infection, death of the skin, and the need for removal of the skin and further examination like X-ray, MRI, and blood work. There was someone that I knew could help an went to make the phone call for an appointment.  After consulting with another provider, it was decided that the patient would have a small surgery and evaluation of the skin, bone, and tissues. Returning to the patient, I explained the plan.

He was deeply troubled by his toes and had difficulty getting past the blackness of the skin. And although he hadn’t done anything for the last six months, he wanted to have surgery and a more specialized evaluation today. I explained that an appointment today was not possible, but that one was scheduled for tomorrow. I spent a good amount explaining what was expected and he left far happier than when he’d arrived. My medical assistant printed him out the antibiotic prescription and pain medications, along with the directions to tomorrow’s appointment. Before he left, she cleaned the site and bandaged it as best as possible.

The next day, early in the morning, he walked back into the clinic with a smile on his face. My medical assistant quickly came and found me, and I hurried out to the front room to talk with him.  He indicated that he couldn’t afford to go to the specialist. I tried explaining that the cost would be covered. He replied that he only trusted me to help him, but that he’d “taken care of the situation himself.” I had no idea what this meant.

He was rushed back into an exam room while I finished up my current appointment. When I returned to his room, he explained that after he left the clinic yesterday, he found some dental floss and began cutting off the dead tissue on his own. He twisted the dental floss back and forth. The smaller toes had been less of a problem. It took him an hour to cut off the skin from the big toe.

Removing his sock and allowed a better examination. All the black tissue was indeed gone. Because the skin had died long ago, the real problem was the open wound and his lack of cleaning of the area. Pointing to the top of the first digit, I showed him where the bone was sticking out of the great toe. 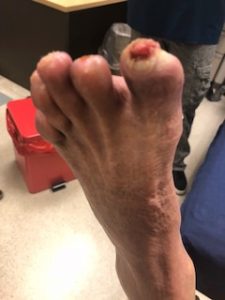 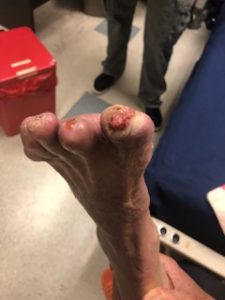 He wasn’t worried in the slightest. I explained that an infection was possible. He argued that if he hadn’t had an infection by this point, he doubted one was going to happen. He slipped back on his sock and shoes, and left the clinic office without a word, whistling the entire time happily. I’d ever seen anything like it.