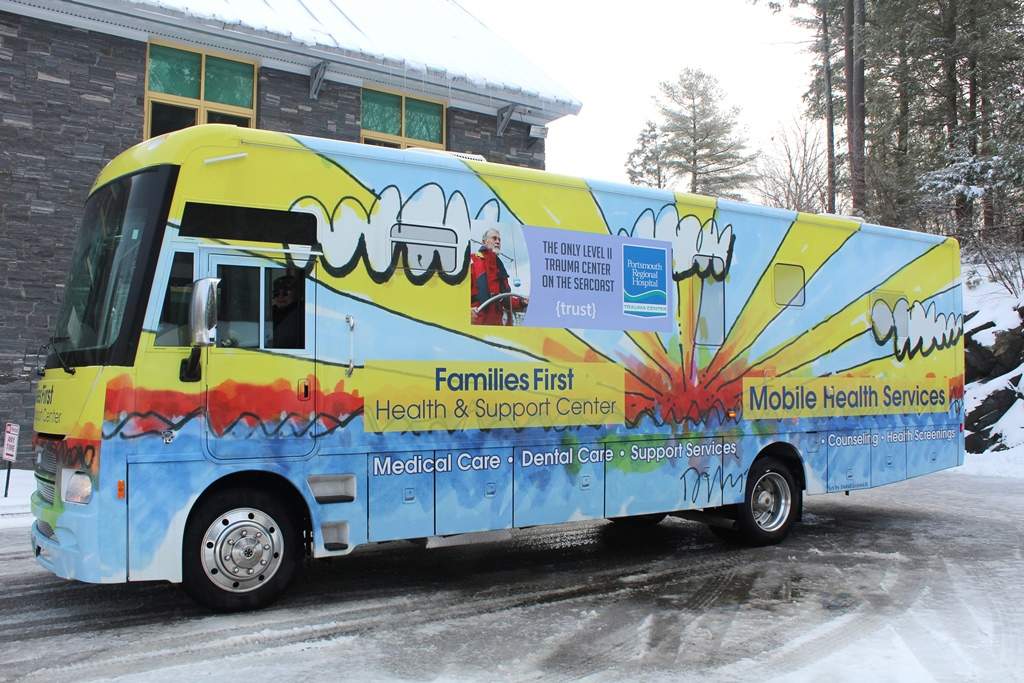 I was volunteering for a homeless clinic in the inner cities. We had a bus that would drive around to a few different locations. People, not always homeless, would stand in line until it was their turn. My fifth or sixth patient for the day, was an older lady, probably in her later fifties. It was at least seventy-five degrees out. However, this patient was wearing what appeared a sweater and a jacket.

As is customary, she filled out her pre-screening packet. She was on blood pressure, cholesterol, schizophrenia, depression, and anxiety medication. She needed a refill of each of these medications. I was able to verify that she had them ordered several months previously. It was easy to get them reordered. She also wanted to have some blood work tested, including HIV, Hepatitis, diabetes, and other general blood tests. These are common tests, especially among the homeless. 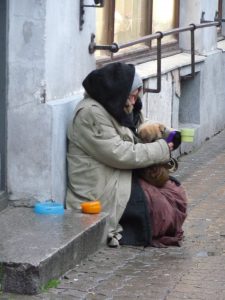 At the window of the bus, I talked reviewed her paperwork and requests. At the end of the initial screening, she said, “I’ve also got this rash on my back that won’t go away.”

I said, “We have a room in here that I could look at the rash. Do you want to come inside?”

“That would be great.”

At this point, she appeared to be sweating, which was not surprising, since she had so many clothes on. She stumbled slightly as she came up the steps. One of my staff helped escort into one of the three rooms inside. The bus was air-conditioned and I figured she wanted a slight respite from the heat. My nurse gave her a couple of bottles of water. Before I was able to see her, she asked to use the restroom, which we gladly allowed. She was given some food as well and returned to her room.

When I entered, the smell was overwhelming. This is not unusual or surprising. I was accompanied by a female nurse to help facilitate things, as well as to provide a level of protection for the patient as well as for myself. You can never be too careful.

I asked, “How long have you had this rash on your back?”

“It doesn’t itch a ton. It hurts a lot. I don’t have a mirror and haven’t been able to see it.”

“Yes. I was in a home until about a month ago. I have just recently been approved for some governmental housing. I will be able to move into an apartment in 1 week.”

“That’s great to hear. Are you allergic to any medications?”

“Is it alright if we look at your back?”

The older lady had trouble removing her jacket by herself. My nurse helped. The sweatshirt underneath was stained everywhere and appeared as if she’d been wearing it for several days. There were stains on the front, likely food. Other stains coated the sleeves with dirt and such. But my eyes were drawn to a stain on her back. It was as large as a basketball and was still slightly wet as if it had rained recently. But we hadn’t had rain in three weeks.

My nurse and I helped the patient out of her sweater. She had a few shirts underneath. The instant the shirt was removed, the smell in the bus worsened and ripened. That was when I noticed that her T-shirts were plastered and stuck to her back.

I asked, “Has the rash been draining any fluid?”

“When did that start?”

“About a week after the rash started, I found that the back of my shirt was wet. I noticed this when I was sitting down. I didn’t have a way to clean my back, so I added another shirt. After that one got wet, I added my sweater and then my jacket. I just didn’t know what else to do.”

It took us about twenty minutes to remove the other few t-shirts. We had to soak areas with hydrogen peroxide, cut pieces of the shirt. When the last layers of the T-shirt were removed, I was amazed and shocked by what I saw.

I asked, “Did you have blisters on your back?”

“I think so. I could feel them squish back and forth whenever I was sitting or laying. And my skinned burned so bad.”

I said, “I think I know exactly what happened.”

“We will get you all the help you need,” I said.

“How could a rash get so bad?”

“Actually, what you had is called Shingles.”

“It comes from a virus, actually, the same one that causes chickenpox. But, when you get older, you get these huge blisters in one area of the body instead of all over. Does that make sense?”

“That problem in your case is that because of the size of the area, and that you are homeless, I think that on top of the shingles, a bacteria infection got into your skin. In fact, it’s pretty serious. You have pus over your entire back. There are large pockets of sores and such. We need to send you to the hospital for IV antibiotics and treatment.”

“Ma’am. The hospital will work that out with you. The problem is that your infection is so bad, that if you don’t get treatment, you could die.”

My nurse and I had never seen such a serious case of secondary bacterial infection. We had to call an ambulance to have her taken to the hospital. It was a wonder that she was walking and talking at all. 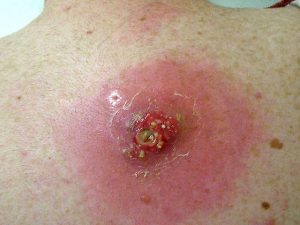 I wish I had taken a picture. But imagine that the entire back was infected. The skin was a good inch thicker than it should have been. Pus or Purulent discharge was coming out of almost every pore. Her entire back was wet from pus. It was quite a sight to see. The above image is similar – except it was the entire back and not just one area. We never saw her again, which also typical. But we are confident she got the care she needed.