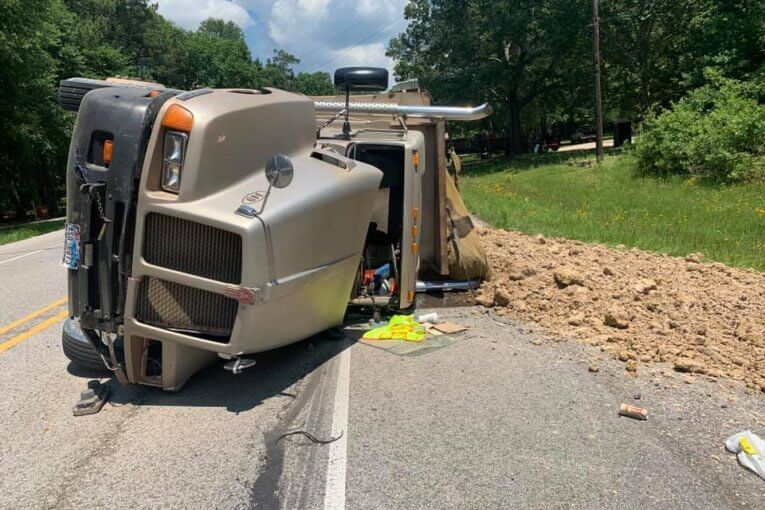 Paramedics arrived at a Surprising Car Accident on a Dirt Road approximately forty minutes after it occurred; at least, that was the best-case scenario.

The accident occurred but was unwitnessed. A driver came upon the scene, and he felt like he must’ve arrived less than ten minutes after the original accident. The accident scene was located on a dirt road, with a slight incline, and right on a curve in the road. Police reports indicated that a teenager had recently stolen a dump truck from a worksite and it was believed to be the exact vehicle involved in the crash.

Mr. Morgan was the first to arrive. When he got out of his car, he circled the vehicle, searching for occupants, anyone injured, or any sounds. There were none. He had a pretty good view into the cab, through the window, and found that the front seats were empty. The front glass was cracked and splintered. He next searched the embankment next to the vehicle, and again, found no one. He walked down the hill and shouted for anyone to respond, but the entire area was quiet. In the end, Mr. Morgan felt that whoever was involved in this accident was hiding or running away. Because he didn’t have cell service, in this area, on this road, he hopped back into his car and drove a few miles back down the road.

The ambulance arrived as quickly as possible. A firetruck and two police cars arrived mere minutes after paramedic Garcia was walking towards the dump truck. He noticed that it was on its left side, the same side as a driver would be. He reacted very similarly to Mr. Morgan. After checking the front window, the area around the vehicle, and more – he concluded the same results as Mr. Morgan. However, his training and experience told him that whoever was in this crash had walked away with a pretty severe injury, and he was likely bleeding somewhere in the woods surrounding the road. He began searching the area for any footprints or other signs of injury.

Twenty minutes later, a tow truck had been called, and the road had been blocked. Garcia had found no evidence of anyone injured in the surrounding area. Another officer and a few firefighters had joined the search. They all had come up empty-handed.

Officer Samansky, standing near the truck, yelled, “I hear something. It sounds like gasps.”

Everyone sprinted in her direction. She was bending down near the roof of the vehicle.

Her senior officer, Officer Blanding, asked, “Are you sure that you heard something from the vehicle.”

“Someone is inside. Listen.”

The next sounds were not hard to imagine. The individual trapped somewhere inside had evidently woken up and was screaming. The sounds were unnerving.

“What are our options?” Firefighter Jenkins asked.

Paramedic Garcia said, “See if you can climb onto the vehicle and go in through the passenger door. See what you can see. ”  Garcia moved to the front window and struggled to see anyone inside. That’s when he saw the arm for the first time. It was caught outside the window somehow. The rest of the body had been pinned above the seat, which was now on its side. The occupant was struggling with the ability to move, but he was clearly in some obvious pain.  “I see someone,” Garcia shouted. “His arm looks pinned under the vehicle.

The staff worked furiously for the next several minutes. Firefighter Jenkins was inside the vehicle, trying to stabilize the driver. He was in a world of hurt. The first thing he noticed was that the truck had landed on its side, on an embankment, but that the ground was not smooth. The window appeared to have been rolled down. He could stand on the ground and noticed the arm was bent unnaturally like it had been sucked underneath the truck. They handed him a shovel, and he began digging at the ground through the side window.

Paramedic Garcia climbed into the cab as well and had found the man in better condition than he would have ever believed. The man had hit his head, and it was bleeding. He wasn’t young and told Garcia that his name was Hector Brosnan and that he worked for the dump truck operator. The man was twisted and was essentially pinned, because of his arm, to the back window, above the seat. He was in serious pain.

Ten minutes later, the dirt around Hector’s arm gave way, and his arm could be maneuvered in such a way that he slid down onto the seat.  Hector was in bad shape. He was breathing hard, and he was barely conscious at this point. The pain and the situation had been hard to handle. His arm was broken in a few places, and much of the skin had been torn from the arm. There was blood and damage everywhere.

Jenkins and Garcia maneuvered and finally lifted Hector out of the cab of the dump truck through the passenger window. Paramedic Furtado, a new paramedic, was ready with the gurney. She and officers Samansky and Blanding helped lift and transport Hector to the gurney. The paramedics began working promptly. They put an air cast around the arm, started an IV in the opposite arm, and strapped the patient to the gurney. He was loaded into the ambulance and was driven to the hospital.

Upon his arrival at the hospital, there was a helicopter standing by, and he was transported to a larger hospital in the city. The doctor, upon arrival, was amazed that Hector had survived such an accident. They had a surgical center ready for him. They had to pick out most of the gravel embedded in his arm, clean the wound before they were able to open the skin and place rods, and fix the fractures in the arms.

Hector suffered a shoulder dislocation, along with a broken arm, a concussion, and some fractured ribs. He was treated at the hospital for several days before being discharged. He required some skin grafts, and other treatments in order to save the arm.

Hector reported that he was driving his truck on the dirt road with his elbow hanging out of the open window. The truck tipped so fast that he didn’t have time to react. Somehow, his arm was sucked out the window. He was fortunate that there was uneven ground. If he’d had the entire weight of the truck entirely on his arm, the damage would’ve been so much worse.

Several months later, he returned to the clinic, and the nurses took pictures of his arm. The hospital staff was amazed at the body’s ability to recover and the significant trauma and damage received by Hector. Two weeks prior, he had been cleared to return to work. His arm was stiff with damage and scar tissue. It would never be as strong or stable as it had been before, but he was fortunate that his arm wasn’t lost in an amputation.

The assumed teenager who took the original dump truck for a joyride returned in an hour after taking it. He was able to return the vehicle before anyone noticed that he had done so. 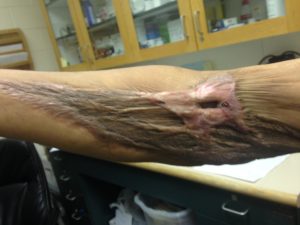 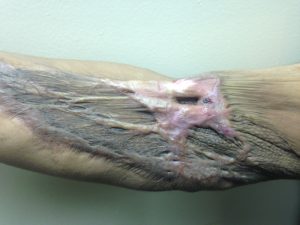 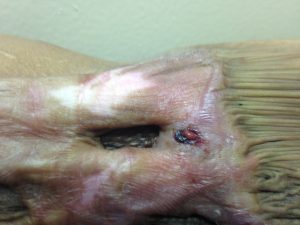