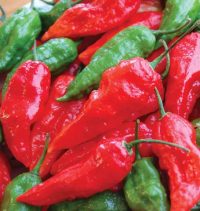 Imagine eating the hottest thing you’ve ever had in your life? What would that be? Salsa, Jerk Chicken, Kimchi jjigae, red chilis, or something else.

Research shows that each of us processes spicy foods differently, and that is why there is such a vastly different reaction to foods. And even the same person has some days where they can eat a vast amount of spicy foods, yet, another day, their reaction is far different.

This medical story comes to us from eating one of the hottest peppers in the world. Ghost Peppers are considered to have a “measured” heat of more than 1 million Scoville heat units. A jalapeno is measured around 5,000. It has been shown that a single seed can cause severe burning in the mouth for over thirty minutes.

A 47-year old male from California had a far different experience back in 2016. The man had been given a puree of Ghost peppers placed on top of a hamburger as part of an eating contest from a local restaurant.

He began eating without too much cause for concern. He reportedly finished the entire burger. Quickly he began drinking water. In all, he drank six glasses of water. Suddenly, after drinking the water, he began to vomit and retch violently. He was rushed to the emergency room in San Francisco because he couldn’t stop vomiting.

He was admitted and sent for further evaluation. He underwent a CT scan of the chest. This apparently showed that his esophagus was torn, and his left lung had collapsed. These were serious concerns, and the man was rushed in for surgery.

This story was reported by the Journal of Emergency Medicine, where it indicated that the man had a 1-inch tear in the esophagus. This allowed for food, onions, puree, bile, and water to settle around the lung causing it to collapse. The surgery repaired the esophagus and help treat the lung collapse. As a result of the injury, and surgery, he was placed on a feeding tube.

The patient suffered from a “Spontaneous Esophageal Rupture” or Boerhaave Syndrome. This is a very rare condition and is caused by violent vomiting and retching. It is fatal in anywhere from 20-40 percent of the cases.

In this man’s case, he was required to spend more than three weeks in the hospital before he was released. He kept a feeding tube in place until the lung and esophagus healed. It was expected that he would make a full recovery. I am pretty sure he will think twice before eating a ghost pepper again.

Without treatment, the condition would have proven to be fatal.

Learn more about the case here: Journal of Emergency Medicine