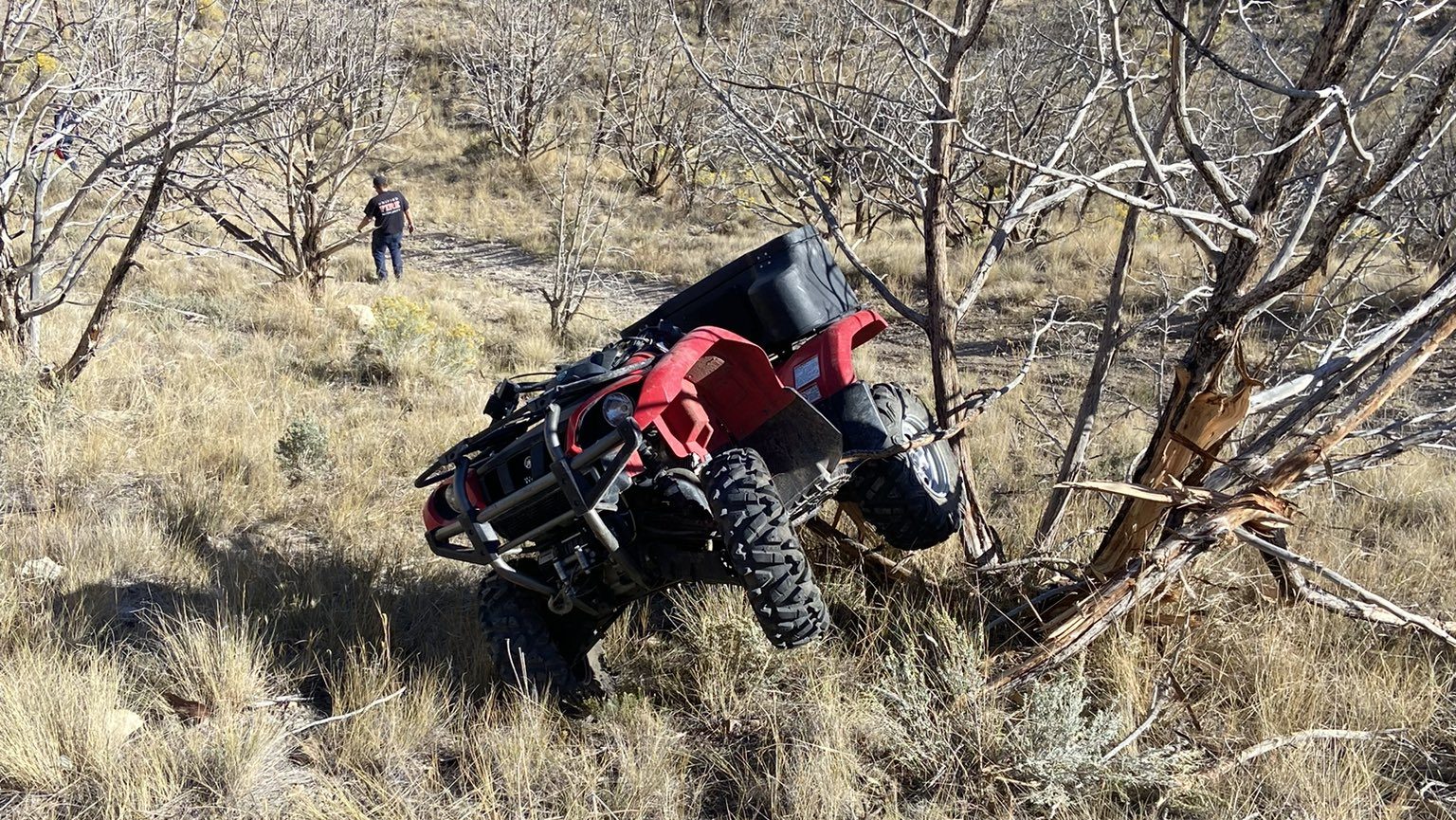 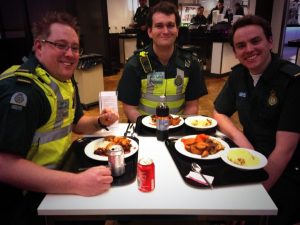 A paramedic was finishing lunch at a local restaurant with his partner and a local high school student taking an emergency medicine high school class and getting some experience with a ride-along. They had just paid for their food when the call came in that there was an accident with a possible amputee scenario on one of the local trails near the National Park. It was far too windy to send in a Flight for Life helicopter. Their ambulance was the closest medical transport vehicle to the injury.

The drive up the canyon was scheduled to take more than twenty minutes, and they went as fast as they could. They had received very little additional information. A hiker had run down the mountain to get into cell service, and he reported an accident or a fall, though he didn’t see the injured directly. They considered getting search and rescue involved, but apparently, the location was close to the trail, and the man’s location was known to the group. The ambulance was required because the guy was in bad shape, and he needed to get to the hospital.

When the ambulance arrived, they found one man had been sent down the hill. He didn’t have any updates. As they got things ready, He described hearing a whine of an engine, a crash, and a lot of screaming. Other people were there, and he was told to run until he had cellphone coverage and call the authorities. Someone had shouted about a severe injury to the leg and a possible need for an amputation.

The location of the accident was about half a mile from the parking area, and they would need to travel through some rugged terrain. They wouldn’t be able to transport their gurney and decided to carry a plastic backboard, a medical bag, and some straps to get the patient stabilized.

It took more than fifteen minutes to get to the location. The area was in a pine forest with several different trails. This area appeared to be where motorcycles and ATVs often came for fun. Hikers and campers were also prevalent in this area. Some steep trails led to waterfalls further up the mountain.

“Over here,” cried one of the guys when they came into view.

Derrick, the lead paramedic, was instructed to a cliff area to the right. Danvers was his partner, and Lincoln was the high school student.

They crossed off the trail and cut through some of the trees. At one point, they hit a ridge, and the path sloped down until it reached a substantial drop of ten feet. It was a hard climb to the bottom.

“Jessie,” a man shouted. “You’re seriously injured. You knocked yourself out. The ambulance is here to help.”

For the first time, Derrick saw the accident scene. An ATV was off to the right side, face down. Steam came up from the engine.

“Help me get up,” cried Jessie.

“Not until you’re cleared by medical. They are almost here. I see them.”

Derrick shouted, “Jessie. We’re the paramedics, and we’re almost to you. Stay calm, and we can help you.” To Danvers, he said, “You go find out what happened. Be quick about it.”  To Lincoln, he said, “Where do you want to go?”

Lincoln said, “With you. I want to see the injury.” The excitement in the student’s voice made Derrick smile. 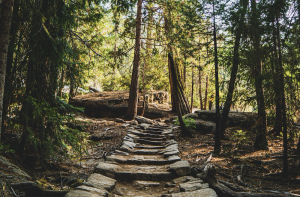 Derrick took the backboard, and Lincoln was handed the straps. Derrick already had an emergency bag with supplies, gauze, a neck brace, and more. To get to Jessie and the three men around him took some maneuvering. They crossed back and forth and finally reached the lower area. Jessie was lying face down on the ground. Derrick could see that a leg and arm were broken even from here. He had a single blanket laid over his back.

Derrick said, “The guy you sent down the hill reported a possible amputee problem.”

“No,” shouted one of the men. It was the same guy who had been talking to Jessie earlier. “He had an ATV accident. He was going, and his wheel bent low, and his weight shifted, and he rolled down the hill. I’m pretty sure the ATV landed on him once.”

“Okay, Tom. You’re the voice for the group. I want to hear things from you only for the first few minutes. Later, if someone else has something to add, they can.”

“How long was Jessie unconscious?”

“Thirty minutes or so. At first, he was just lying there. His leg looked bent wrong, and we were afraid to move him. We weren’t sure what else we should do.”

“When he woke up, did he know where he was?”

Jessie replied, “I asked what the hell happened.”

Derrick asked Jessie, “Does your neck hurt? Can you feel your legs?”

“I can feel everything. I’m fine.”

“Well,” replied Derrick. “That’s not exactly true. I’m down looking at your leg, and your bone is sticking through your skin. Most people would be screaming in pain.”

Derrick turned to ask Lincoln to help, but Lincoln was on the ground, unconscious. He was pale but breathing. Derrick yelled, “Danvers. Over here! The high school student is out.”

Danvers arrived and began checking Jessie’s neck, who reported some pain but could feel everything in his legs and feet and could move his hands. Danvers pulled out a C-collar and began placing it on his neck.

Jessie argued, “See. I’m fine. Nothing is wrong with me. Why am I laying on the ground like this?”

Derrick and Danvers shared a glance. Derrick answered, “You’ve been in an accident, Jessie. You have a broken bone and were knocked unconscious. We will need to get you onto a backboard and strap you down. You have a head injury and possibly some more damage.”

“No way. Everything feels fine.”  The wind started howling around the group as leaves and dirt were blown everywhere.

“I’m looking at your leg. I can see your bone.”

Tom said, “You just told him that. Why are you saying it again?”

“Screw you,” shouted Jessie. “You never said anything to me. This is the first time the doctor has said something to me since I arrived at the hospital.”

Derrick mouthed, pointing to his own head, “A head injury. He needs to calm down. Let us get him to the ambulance.”

“Why is there blood dripping from my forehead?”

Having finished getting the C-collar into place, Danvers moved to get a good look at Jessie’s face. “Oh, yea. Large laceration on forehead. Lots of bleeding. There might be some other injuries that I can’t see.”

“Everything else seems stable. He has a broken wrist, but it isn’t a compound fracture.”

“We need to stabilize his head and roll him over to the backboard.”  The storm coming intensified, and rain started falling.

Danvers said, “Your student is starting to wake up.” 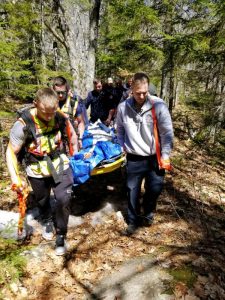 They positioned the backboard on the ground next to Jessie. They had to move some leaves and some branches and brushed the ground to make it as even as possible. It was starting to get a little wet. This was going to be a difficult move to get him onto the board. Danvers protected the head and neck, and the three guys and Derrick positioned themselves correctly, ready to turn Jessie.

“On the count of three,” Derrick shouted. “One…two…three.”

Jessie started to move but began screaming loudly. “Ouch. Ouch. My stomach. Something is being ripped out of my stomach.”

“Stop,” Derrick shouted, and he quickly moved to the opposite side and bent low to the ground.

His mouth gaped open. Somehow Jessie had landed directly onto a tree stump, and it had sunk deep into his chest cavity. The tree’s diameter was but a few inches, but it was directly into his center.  Derrick asked, “Anyone have a shovel or something?”

“We do,” screamed someone from back on top. A minute later, a small hand shovel used to dig up the ground when using the restroom was brought forward.

Lincoln had recovered enough to come help keep the body positioned safely as Derrick began chopping and digging the tree. He was pale but steady.

It took several long minutes, but finally, Derrick was able to cut through the tree. Jessie was screaming the entire time. The adrenaline of the moment was wearing off, and the pain was front and center. As the body was rotated over and positioned on the backboard, Lincoln caught sight of the blood and all the damage to Jessie. His eyes rolled up in his head, and he toppled to the ground once again.

The transport to the hospital was another hour. Jessie was stable the entire time but in significant pain. He remained in the hospital for nearly two weeks. It took time to get all the small splinters and sufficient healing of the stomach. The initial surgery removed the piece of tree from his abdomen and cleaned it out as best as possible. The leg required surgery to place a metal plate to stabilize the leg.

Fortunately, he did not require an amputation. However, his ATV accident was serious, and he was lucky to have survived. Lincoln loved every minute of his ride-along and signed up for two others. Once he graduated high school, he planned on studying to become a doctor.