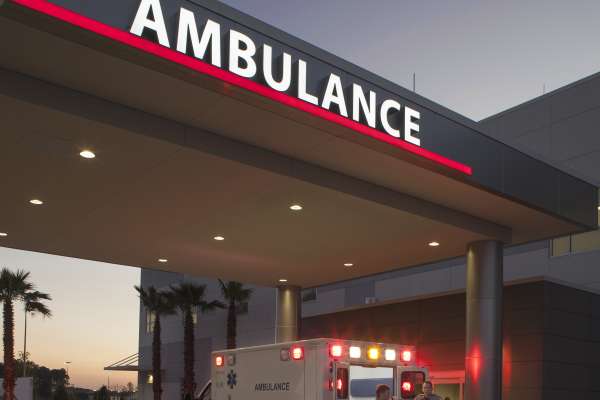 Around two in the morning, our camera caught a man walking up from the street and into the ambulance bay at our Emergency Room. Suddenly, the man tripped and seemed to fall face-first onto the concrete. While lying there, he pulled out his phone and called 911. He told the dispatcher that he had been in a serious car accident the day before and that he was on his way to the hospital. The guy told the dispatcher that he was about to be dropped off at the hospital and couldn’t walk. His friend had been driving last night, and he didn’t want to get his friend in trouble. He hadn’t been drinking, but his friend had been.

We, of course, didn’t know about him falling or walking up to the hospital. The dispatcher called our nursing station, and we were sent out to the front of the hospital with a gurney. The man was lying on his back, reporting pain in his lower and mid-back. He said that he couldn’t feel either of his legs. He was also worried that he might have a concussion and that he had split open his head and might have broken his left wrist.

The patient was quickly placed on a backboard, lifted to the gurney, and brought into the hospital and one of the trauma rooms. A few nurses were brought in to help, and I was in charge of the wound on his head. He had a gash on the top of his head that was jagged, thick, and bleeding profusely. The man was crying and screaming in severe pain.

Doctor Lee arrived and assessed the patient quickly. He was emotional and in pain, but he wasn’t going through a life-and-death situation. But there was a lot that we didn’t know.

“Mr. Oliver. I am Doctor Lee. Do you know where you are?”

“Am I having another seizure?” Mr. Oliver asked. “If not, I must be at the stadium.”

I was situated near the top of the gurney, where the head was bleeding as Dr. Lee was off to one side, trying to talk to the patient. I put pressure on the wound, but it kept bleeding. I went through several gauge dressings. 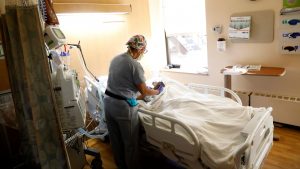 “Wake up, Mr. Oliver,” said the doctor. He rubbed at his chest and shoulders. The man’s eyes were heavy and unfocused. “I’m going to fix your head first.”

Mr. Oliver mumbled, “Please help me. I am in so much pain.”

“When was the accident? You told the dispatcher it was a car accident.”

“The night before last, I think. Maybe it was a few hours ago.”

“Where you wearing a seat belt?”

“I wasn’t, but my friend, the drive was. I just don’t want him to get in trouble.”

“I’m going to staple your head and send you for some scans on your back.”

“Please put in stitches. I have a bad reaction to staples.”

Dr. Lee began working on closing the head wound. An IV was placed by another nurse, and some pain medications were given. I helped gather supplies and adjust the light for Dr. Lee. It took about forty minutes to close the wound. It was really jagged, and there were some small pieces of rock removed from the wound.

Mr. Oliver was sent for CT imaging on his mid-back, neck, and lower back. However, two minutes after he arrived, he screamed that he was having a panic attack and needed Valium. He explained that he was claustrophobic and would not be able to relax. We needed him to be as still as possible. I’ve seen patients try to break their restraints while getting a CT. Valium was given.

Upon returning to the trauma room after the scan, he was crying and very emotional. He told me that his head was throbbing, he had some vision changes, and his eyes felt blurry. He thought he was going to vomit. I left to tell Dr. Lee.

Because of the large head laceration and his possible risks, he was next sent for an MRI. He was given some medications to stop him from throwing up. Again, shortly after he arrived, he complained about anxiety and was given Valium.

Immediately after getting out of the MRI, his pain was uncontrollable, and more pain medications were given. The CT exam results came back first, and he had some chronic findings that might have been made worse by the car accident, but nothing alarming was noted.

The patient was groggy when removed from his restraints following the CT results and fell asleep for a few hours. When he woke, he was starving. By this time, we knew the MRI did not show a brain bleed. Some food was brought in for Mr. Oliver. As he ate the last bite, he screamed that his wrist was hurting. He became animated and upset about his wrist.

He demanded, “What if we had been looking at the wrong place for my pain?”

He was sent for an X-ray.

After he had been in the ER for three hours, Dr. Lee returned. “Mr. Oliver. We feel very confident that you have no lasting injuries from the car accident. You may be sore for the next few days, but your back did not show a fracture or anything alarming. Your brain scan did not show a bleed, and no large concern for a severe concussion. Your wrist X-ray shows a previous fracture, but that is now healed, and you have some arthritis.”

“Doctor. I hurt so bad. I can barely move my wrist.”

“We will give you a few days of pain medications. We can give you a wrist brace. You need to go home and rest. Wear the splint for the next few days.”

“What happens if I don’t get better?”

“You can always return if something gets worse.”

“What about a follow-up?”

“You can see your doctor in about a week or so to have the sutures removed from your head.”

“Thank you, doctor, very much.”

Mr. Oliver was discharged and left about twenty minutes later. He didn’t have anyone who could come to get him, and a cab was called, and he was brought to the car door in a wheelchair.

An hour later, there was a phone call for Dr. Lee. When he picked it up, there was a doctor from a hospital across town on the other end.

“Hello, Dr. Lee. This is Dr. Rebecca Blanch. I am one of the ER physicians and wanted to talk to you about Mr. Oliver.”

“The patient says that he was in a car accident last week and that you refused to see or treat him. He has a gaping wound on his head that needs sutures, and he says that he can’t walk.” 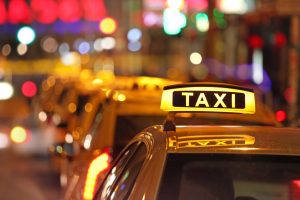 “Dr. Blanch. He left our ER an hour ago. We did multiple CT scans, MRI, wrist X-ray, and everything came back negative.”

“He says that you guys kicked him out because he didn’t have insurance. While he was leaving, he felt dizzy and fell and hit his head.”

Dr. Lee countered by saying, “He told us that he was in a car accident, and I personally placed fourteen sutures in his head while here at the hospital. He has a jagged cut on the top of his head. It was a deep and complete laceration. We placed him on a backboard and did the full workup.”

“What about the gushing cut on his forehead?”

“He left here in a wheelchair, and we saw him into a cab.”

Dr. Blanch paused for a moment. “I think we are going to review our cameras. Will you do the same?”

While looking at the footage from our cameras, we found that Mr. Oliver had walked up to the ambulance bay and tripped. We went further back and found him strolling down a street adjacent to the hospital. It did not appear that he was not wounded or injured at this point. As we followed him, we watched in horror as he ran head-first and dove into a pile of rocks. He hit his head extremely hard, and the man staggered when he stood, blood dripping onto his face and clothes. He struggled to walk the next few hundred feet to our parking lot and into the ambulance bay.

Dr. Blanch called back twenty minutes later, and they had found him arriving at the hospital in a taxi. He sat by a corner and used a knife to cut out the sutures placed by Dr. Lee. He next stood and started hitting his head into the wall until it was bleeding.

Mr. Oliver was confronted and admitted to self-sabotage because he couldn’t afford the pills he was getting from the streets. Prices had gone up. He had gone to Walgreens and found a bottle of Aspirin and took the entire thing before deciding to go to the hospital.  That was the reason his head wound kept bleeding.