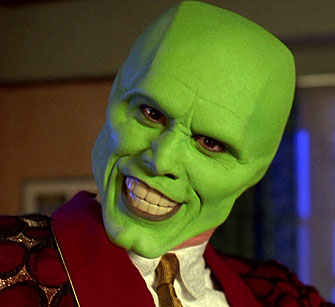 If you combine Halloween and a full moon, you really have no idea what to expect in the Emergency Room.  It was my last shift of four twelve-hour shifts in a row when things began to crash down around us, and I mean literally.  The story of the Green Machine is legendary.

Around eleven o’clock, a group of teenagers, from a party arrived. They had been playing games and having fun at one of their friends’ houses. It had been well chaperoned. Near the end of the night, they started bobbing for apples, eating doughnuts, and drinking punch. Someone had dared the kids to drink as much punch as possible. It seemed like a fun and innocent game. Unbeknown to the group, someone must’ve spiked their punch because the parents noticed that they were acting pretty crazy. By the time they arrived at the hospital, they were pretty sick. There were five or six kids and they started vomiting everywhere. It took several nurses to start IVs, give meds, and clean up a large amount of puke.

The next patient to arrive came in from a hit-and-run pedestrian accident. It was a preteen kid who had been out with his friends and was hit by a car that came out of nowhere. The kid had been in costume as a ninja and most of his costume was dark. The car crossed the center line and swiped the kid from the side. None of his friends had even seen the car coming and luckily they were several steps back when it happened. The car hit the light pole after hitting the kid and drove off. Luckily, it had only been his leg that had been hit. After a work-up and an X-ray, our staff found that he had a broken leg. The scariest part, it could’ve been a lot worse.

Thirty minutes later was when my patient arrived. He had been found alone in his room and he was unconscious. At first, his parents thought he wasn’t breathing. They called an ambulance and he was transported to the hospital. On the way over, the kid woke up a few times, but the only thing he said, sounded like gibberish. As he was rushed into the exam room, I noticed that he appeared to be unconscious and asleep. An IV had been placed and he had been placed on oxygen. The patient was as relaxed as anyone I had ever seen. He was dressed in a scarecrow outfit, clearly from Halloween, but his face was a dark green as if he had paint or makeup applied.

The patient was mostly stable but unable to respond to the doctor trying to start an initial exam. The doctor pulled back his eyelids, checked his vitals, and listened to his heart. The patient was so calm, he didn’t seem to have a worry in the world.

“Is this green paint on his face?” asked Dr. Nielson. “Can someone try to wash that off?”

RN Rebecca and I were in the room attending to different things. I began cutting off the costume of the patient. Rebecca said, “I think it might be paint on his face. Does anyone know if he was huffing paint?”

“Go ask the parents,” Dr. Nielson asked. “It could also be part of his costume.”

Rebecca ran from the room. 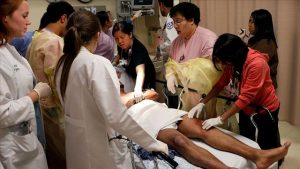 That was when the patient’s eyes flipped open and he began fighting me and Dr. Nielson. He grabbed my wrist and started screaming. He said something about apples, sleeping, zombies, and creatures of the dark. His spittle was spraying the room as if he was drooling. He was so strong.

I followed his advice and soon we had control of the patient. His eyes were unfocused and he was staring off at the ceiling. No matter what I said, he could not refocus.

His green face was about as weird as anything I’d ever seen.

The patient said, “Take off my clothes. It is so hot in here.”

“I don’t think that is paint,” Dr. Nielson said. “Something else is going on here.”

Rebecca raced back into the room. She said, “The parents are calling their daughter, still at the house. She’s going to check his room. This kid’s name is Stewart.”

“We can’t wait. Let’s get a tube down to his stomach and give him some charcoal.”

“Do you think this an overdose?”

“I’m not sure. This is the best treatment for what we do know.”

It took another nurse and MA to hold Stewart while they put a tube down into his stomach and gave him a large amount of charcoal. The tube went through his nose, to make it easier. The goal was for it to bind with anything he might have in his stomach, especially if he overdosed.”

Rebecca asked, “Will Charcoal help if he huffed paint?”

We quickly increased the IV fluids and gave some medications that could help with some of the adverse effects of the symptoms of huffing. Not long afterward, the patient became calmer but he certainly didn’t like anything in his nose and kept trying to pull out the tube. He was still confused and his eyes fluttered.

“Go check in with the parents again,” said Dr. Nielson.

Rebecca left and most of the charcoal had been administered. The moment Rebecca stepped from the room, Stewart, knocked me sideways and stood to leave. His eyes flashed open and he ran for the door. His IV site was pulled from his arm and he made it a few steps outside the door before colliding with one of our housekeepers. Both were sent sprawling to the ground. Stewart was captured and taken back into the exam room. More staff came inside and helped hold down the patient so that a second IV and nasogastric tube could be placed.

Rebecca returned, she was out of breath. She said, “Sister didn’t find any paint cans, but there was a ton of wrappers of Benadryl. Looks like the kid crushed and snorted them.” 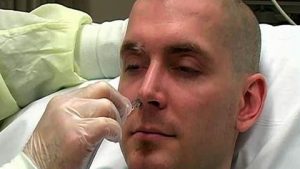 Dr. Nielson thought about it for a second. He said, “That’s why his face is green. It isn’t paint but an anticholinergic event. Let’s sedate him and put him on a ventilator. Give more charcoal and fluids.”

The next few days were rough for Stewart. He had some cardiac changes and abnormal findings in his blood work. But he pulled out of everything alright. He had a lot of explaining to do, especially to his parents. When the day finally came for Stewart to be released from the hospital he finally told everyone what happened. He didn’t remember everything but his story was unbelievable.

Stewart said, “I have a drug problem and need help. I understand that. I don’t remember everything but I was at this party with some friends and I thought it would be a good idea to spike the punch. I almost got caught by his mom and I ran from the house. I was driving home when I hit a light pole. I was pretty spooked and so when I finally got home, I just wanted to get some sleep. I just wanted the day to be over. I heard that Benadryl helps you sleep and so I decided to snort some Benadryl. I guess the rest is history.”