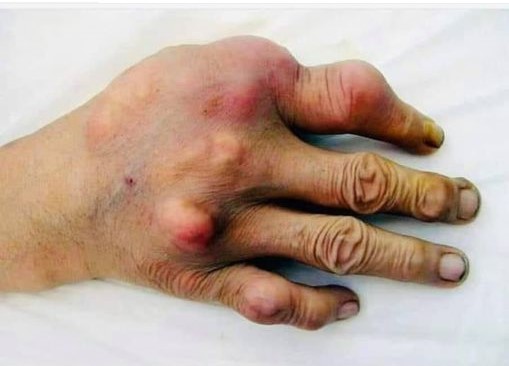 I can’t tell you how often I see patients and the first thing out of their mouth is . . . “I read on the internet.”

Now don’t get me wrong, there is a lot of information on the internet and some of it is good and some . . . not so good. But trust me, if you want life-saving information and treatment on cancer diagnosis, post-menopausal bleeding, heart attacks, medication side effects, and many more – Go to the professionals!!!

Robert was my patient for the day – and he has been good-natured enough to let me share this story.

When I entered the exam room – Robert had a large glove on his right hand. When he took it off, there was some redness, bruising, swelling, and a whole lot more.

Robert explained that he started having these nodules on his right hand and they were painful, swollen, and red a few weeks before. Like many people, going to the doctor was the last thing he wanted. He thought about his “injury” for a day or so and thought that he might have hit his hand at work. He knew that NSAIDs help with swelling so he started taking IBU three times a day for several days. He felt some relief and thought that he had solved the problem. Despite the pain improvement, he started noticing more and more areas of swelling.

He finally admitted to himself that he hadn’t injured his hand at work and so he wondered if the swelling could be caused by inflammation. He thought that this was a logical idea. So for the next 24 hours, he was putting an ice pack on his hand every twenty minutes and resting for an hour or so.

His hand became super cold – but no improvement. He tried some creams, Tylenol, and finally a heating pad to improve circulation.

Research on the Internet

Robert sat down at his computer and began searching the internet about hand redness. There were several things that popped up – Infection, Inflammation, Spider bites, and STDs.

Robert admits that at this moment, he started freaking out. He was glad to see that he hadn’t been too far off the mark with Inflammation. The rest of the things sounded pretty bad. To him, the most likely culprit was an infection. For the next two nights – he took as much triple antibiotic cream and lathered his hand.  Nothing helped, in fact, it was now starting to look like he had some boils under his asking and thought that they were pus pockets. In the clinic, he admitted that he took a needle and tried to pop one of the areas on his knuckles. He wasn’t able to get out of any infection.

Having a Frank Discussion with his Wife

For Robert, this part was the most embarrassing. He read that some STDs – such as Gonorrhea can cause Gonococcal arthritis in joints. It affects women more often but Robert had the brilliant idea to bring it up at dinner. His wife had been asking him for the past several days to go see his doctor. He’d refused but he decided a mealtime discussion about sexual partners was a good idea. He slept on the couch that evening. This was the day before he came into the doctor’s clinic needing more treatment.

Back to the Internet

Later that night, he began looking into cysts of the hands, on the internet. The first thing he clicked on was Ganglion cyst. He read that these are non-cancerous cysts that commonly develop on the tendons of the wrists and the joints of the hands. Sometimes they go away on their own, sometimes they need to be drained or surgery, and sometimes there is a more alternative treatment.

He read that these cysts have been around for a long time – meaning that they were seen many years ago. Treatment would consist of hitting the cysts with a bible or the largest book around. This is probably more of an urban legend and NOT the recommended treatment. However, Robert was desperate. He found his bible and began hitting his hands. Needless to say, nothing happened but some more swelling, pain, and bruising.

Inside my clinic, Robert and I were able to discuss the cause for his bumps and lumps and even the appearance of a boil-like infection on his hand. He had been suffering from joint pains, fever, and chills for a few weeks by now and nothing had helped.

The actual diagnosis is something called Tophi Gout.   And you guessed it – the root cause is gout. Gout often causes problems in the joints. We did a blood test and began the correct treatment immediately. In a matter of days, he noticed an improvement. He was having a flare-up and receiving the right treatment was largely beneficial.